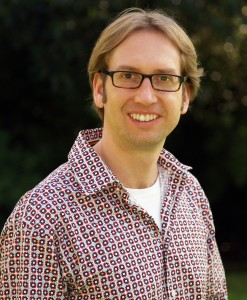 Brett Ferguson grew up in Stratford, Ontario, Canada.  He attended the nearby University of Waterloo where he obtained a Bachelor of Science degree (Hon). It was during his undergraduate degree that Brett became interested in the nitrogen fixing symbiosis between legume plants and rhizobia bacteria.  He pursued this interest by undertaking a research-based Masters of Science at Wilfred Laurier University and the University of Waterloo under the supervision of Prof. Frederique Guinel.  Brett’s MSc project used mutant plants and a variety of techniques, including hormone quantification studies, to enhance the understanding of plant hormones in pea nodulation. Indeed, he identified novel roles for ethylene and cytokinin, including demonstrating that elevated cytokinin levels can increase ethylene biosynthesis, leading to an inhibition of nodulation (Ferguson et al. 2005a). These, and other related findings, together with his subsequent proposal to establish nodulation research at the University of Tasmania (UTAS), resulted in Brett being awarded a number of scholarships to undertake a PhD at UTAS under the supervision of Prof. James Reid and A/Prof. John Ross.

Brett was recruited to join the ARC Centre of Excellence for Integrative Legume Research (CILR) during his PhD.  When his studies were complete, he moved up to Brisbane to undertake a postdoctoral position at the UQ node of the CILR with Prof. Christine Beveridge.  This work focused on understanding the signalling interactions involved in the regulatory control of shoot branching. He developed the novel technique of stem girdling as a tool to study the transport of auxin and other long-distance signals involved in shoot branching, such as mobile plant resources (Ferguson and Beveridge 2009). Additional work investigating the role of auxin, cytokinin and strigolactones has also contributed to the physiological and molecular understanding of shoot branching (e.g., Dun et al. 2006; Dodd et al. 2008; Ferguson and Beveridge 2009; Brewer et al. 2009; Renton et al. 2012; Young et al. 2014).

Brett was subsequently recruited to join the research group of Prof. Peter Gresshoff in the CILR, where he has aided in the discovery of many new genes, signals and signalling interactions required for the formation and regulation of soybean nodules. This work predominately formed the basis for his Goldacre Award.  He helped to identify a number of novel, differentially-regulated genes acting in the early stages of nodule development (e.g., Hayashi et al. 2012, 2014; Wang et al. 2014).  He also considerably contributed to the discovery and functional characterisation of many new genes and signals acting to regulate legume nodule numbers. The ability to regulate nodule numbers is critical for the plant, as forming nodules is extremely resource-demanding. As a result, legumes have developed innate mechanisms to balance their need to acquire nitrogen with their ability to expend energy. Brett’s findings using soybean and common bean include the discovery of novel, small hormone-like peptide signals that control legume nodule numbers (e.g., Reid et al. 2011a; 2013; Ferguson et al. 2014; reviewed in Hastwell et al. 2015). These discoveries have advanced the molecular model of nodulation control (Ferguson et al. 2010; Reid et al. 2011b) and have resulted in multiple publications, journal covers, patents, grants and speaking invitations.

Through a multi-disciplinary and trans-institutional approach, Brett’s research has helped to contribute to the research fields of legume nodulation, shoot branching, hormone interactions, and peptide signalling in plant development. To find out more about Brett’s work, visit: http://www.uq.edu.au/agriculture/brettferguson or http://www.cilr.uq.edu.au/brett-ferguson.