Dear ASPS Past and Present Members

We are pleased to advise that the photographs from ComBio2017 can now be viewed at: http://www.combio.org.au/combio2017/

The ASBMB Grimwade Keynote Plenary Lecturer is Randy Wayne Schekman. Professor Schekman is a Nobel Prize-winning American professor of molecular and cell biology at the University of California, Berkeley whose research in vesicular trafficking is highly relevant across both plant and animal systems. The ASPS is pleased to support two plenary lectures, including the R.N. Robertson Award & Lecture, which will be given by Dr Michael Udvardi (Noble Research Institute) and the ASPS Jan Anderson Award & Lecture (speaker TBC). The ASPS in conjunction the Annals of Botany and Functional Plant Biology will deliver the Annals of Botany Lecture to be given by Professor Keiko Torii (University of Washington) and the ASPS Peter Goldacre Award (speaker TBC). The names and institutions of all confirmed international plenary speakers can be seen at: http://www.combio.org.au/combio2018/plenary.html

AgEd Symposium brings together the academic community in agriculture and related disciplines at Australian tertiary and VET institutions. 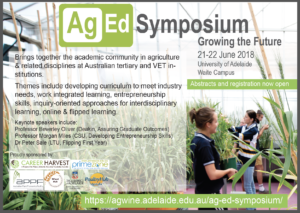 Growing up in the countryside of Ontario, Canada, Jonathan Plett was exposed to plants and planted environments from a very early age.  While a love for agriculture and ‘useful’ plants would come to fruition in his research career, Jonathan’s first induction into the world of plants was through flower gardening – a hobby introduced to him at the age of 10 by an English couple active within the local gardening club.  Over the years of working with plants, Jonathan became fascinated by the mechanics of how plants grew and flourished and how different environmental conditions affected these processes. As early as the age of 12 Jonathan knew that he wanted to have a job working with plants in some form – his first science fair project was testing hydroponic systems for optimal plant growth.  Through his undergraduate work in college, this interest was further strengthened and led to a PhD in plant molecular biology.  This area of science has continued to fuel his imagination and to fascinate him to this day.  Jonathan did his PhD studies with Dr. Sharon Regan at Queen’s University in Canada where he studied the biological function of the plant hormone ethylene.  One aspect of this hormone was its huge role in plant:microbe interactions.  This led to a career shift in his post doctoral work and to his current position as a Lecturer in the Hawkesbury Institute for the Environment at Western Sydney University where he considers the molecular mechanics of how plants interact with soil-borne microbes.

The goal of Jonathan’s research is to foster the relationship between symbiotic soil-borne micro-organisms and plants. These organisms increase plant productivity through improved nutrient availability and plant disease resistance. As intensified agricultural and forestry production is resulting in soils with reduced nutritional value and as plant diseases are becoming more virulent, growers and foresters are becoming more reliant on these symbiotic relationships to support the health and productivity of their plants.  Therefore, we need to select plants that will be able to gain the most from relationships with symbiotic micro-organisms. Currently we only have a rudimentary idea of the plant genetics that enable these symbiotic relationships to occur, let alone how we could select plants that foster these symbiotic relationships.  Jonathan’s research is addressing this critical lack of knowledge by studying the plant pathways targeted by symbiotic ‘effector’ proteins during the initial stages of the interaction between plants and micro-organisms.  Jonathan’s research has shown that these effectors, which are small-secreted microbial proteins, are used by mycorrhizal fungi to manipulate the plant immune response, thereby fostering symbiosis.  This means that the tactics used by mycorrhizal fungi to gain access to their host tissues mirror those of pathogenic organisms, with the production of proteins used to overcome host defences (Plett et al., 2014a). Thus, in response, the plant has evolved mechanisms to defend itself from excessive ingrowth of mycorrhizal hyphae, while still enjoying the beneficial aspects of the relationship.

Jonathan’s work has shown that the plant uses two classic plant hormone pathways: jasmonic acid (JA) and ethylene, to limit fungal growth within plant tissues (Plett et al., 2014b).  His work in the metabolic regulation during mycorrhizal colonization of plants has also shown that plants produce toxic secondary compounds to slow fungal growth and that only certain mycorrhizal fungi are able to overcome these defences by either metabolising the defence compound (Tschaplinski et al., 2014) or by inducing the expression of proteases and xenobiotic efflux pumps to weather the onslaught raised by the plant (Plett et al., 2015).  Altogether, the results of Jonathan’s work have led to a paradigm shift in how we understand the core relationship between plants and their associated mycorrhizal fungi. His data are now being used to screen new tree and, more recently, crop lines (Plett et al., 2016), to find the ‘sweet spot’ in immune defence that enables plants to maximise the benefits from mycorrhizal fungi without compromising disease resistance. The application of these findings will result in more productive tree plantations and better food security in crops.