Thanks to an ASPS Travel Award, I was able to attend the ComBio2017 conference this October in Adelaide, South Australia. It was personally and professionally fulfilling not only to be attending, but presenting, at my very first ComBio. The conference is the main forum for the Australian Society for Biochemistry and Molecular Biology (ASBMB), the Australia and New Zealand Society for Cell and Developmental Biology (ANZSCDB), and the Australian Society of Plant Scientists (ASPS), with the societies coming together for three days to promote the latest in research and education, as well as enable invaluable network opportunities. 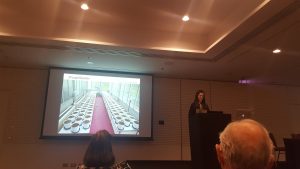 For me, a highlight of the conference was the plenary Annals of Botany Lecture on the second day featuring Professor Cathie Martin from the John Innes Centre. Professor Martin works to increase polyphenol phytonutrients in fruits: compounds with therapeutic properties that could potentially mitigate artherosclerosis and other inflammatory conditions. She emphatically stated: ‘Medicine is not healthcare, food is healthcare. Medicine is sickcare’ – an appropriate reminder for us all.

Over the next two days I attended an array of symposia including: Plant Energy Use Efficiency, Next-generation Phenotyping, Plant Walls and Membranes, Abiotic Stress Tolerance, Microbe-Plant Interactions, and Plant Reproductive Biology. All talks gave me vital insight into the current plant biology research being undertaken worldwide, and offered me several new avenues for my own research – particularly techniques to elucidate the molecular regulation of genes involved in emerging regulatory pathways. The conference delivered an impressive balance of graduate students, post-doctoral researchers, associate professors, and professors presenting their cutting-edge research or stories of discovery.

As part of the crop productivity symposium, I presented my research topic Drought Response in Low-Cyanogenic Sorghum bicolor Mutants; with the presentation being very well received. I took a number of questions during the allocated question time and was given valuable advice driving new exploration within the scope of my research program. It is now the fourth time within a two-year period that I have been a conference presenter. As one might expect, my confidence grows with each presentation and as I become more adept; and there is always a constant challenge to improve and hone my skills in order to deliver a story with a clear message that engages interest and drives impact.

I am extremely grateful to ASPS for providing funding that enabled me to attend the conference and present my research to the plant science community. 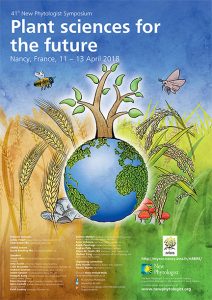 The 41st New Phytologist Symposium will provide new insights into the evolutionary forces and molecular mechanisms that govern plant development and physiology, and their interactions with biotic and abiotic cues.

Invited speakers from the New Phytologist Editorial Board will highlight emerging topics in plant sciences as well as the application of modern technologies to capture the complex mechanisms driving plant development, physiology, interactions and evolution.
Eighteen leading scientists will speak at the symposium along with early career researchers, selected to give talks following submission of poster abstracts. Travel grants are available.

More details and registration at https://www.newphytologist.org/symposia/41. The different flavours of when Science meets Parliament

By Florian Busch from the Australian National University, Canberra, ACT

During March 2017, parliament in Canberra became flooded with scientists of all kinds of flavours for two days as Science met Parliament in this annual event. This event aims at increasing the dialogue between politicians and scientists to increase the awareness and understanding of how STEM can drive Australia’s economic, social, environmental, and cultural future. I was lucky to be picked as one of two early/mid-career plant scientists representing the Australian Society of Plant Scientists. The two days were filled with quite unique experiences, including a full day of career development and preparation for meeting the parliamentarians, and then, of course, one big day in Parliament.

Australia’s Chief Scientist Dr. Alan Finkel opened the first day setting the scene for what to expect. This was followed by sessions on how science is turned into news and used to shape policy. The focus of the day, however, was on how to make the most of the little time we had for our meeting with the parliamentarians. How much science background could we expect? How detailed should we present our work during our meeting with the parliamentarians? In preparation, we paired up in small groups to practice our ‘elevator pitch’, where we were challenged to explain the nuances of our work in a minute or two, to people outside our fields of expertise. My major lesson from this exercise was discovering the fast pace at which politicians move from one topic to the next. This also turned out to be a great networking opportunity, allowing me to meet scientists from diverse fields of research across all of Australia. The highlight of the day, however, was a gala dinner at Parliament House, where we heard from the newly minted Minister for Industry, Innovation and Science, The Hon Arthur Sinodinos, and the Leader of the Opposition, The Hon Bill Shorten, as how they might envision science in future politics. 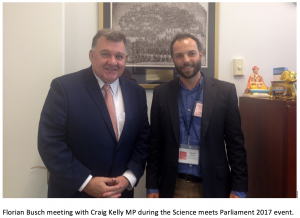 On the second day, we were inspired by Australian of the Year, Prof. Alan Mackay-Sim, and had the chance to meet the Shadow Minister, The Hon Kim Carr. Lunch was broadcast live on TV at the National Press Club, where the Minister for Industry, Innovation and Science was grilled with questions from the press. The definite highlight of the day was meeting our parliamentarians. I was paired up with two other scientists to meet with MP Craig Kelly. This is when practicing our ‘elevator pitch’ the day before paid off; I only had a few minutes to discuss the role of photosynthesis research in securing  food production before MP Craig Kelly ran off to his next meeting. He left us with a deep impression of how parliament works and, hopefully, we left him with some insights into how science works and can shape the economy.

Please find documents for our AGM below.