A moment of great bravery 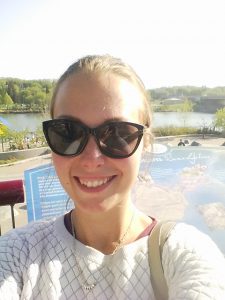 I began my PhD in 2010 with Dr Tony Gendall at La Trobe University, Melbourne. Tony’s group is using reverse genetics to investigate the physiological and cellular roles of two sodium/proton antiporters. These proteins affect cell differentiation and expansion, ro
ot length and lateral root development as well as subcellular trafficking. In my thesis I described the expression patterns of these antiporters in Arabidopsis, and described their role in trafficking seed proteins to a specialised storage vacuole in developing embryos. I presented some this work at two ComBio meetings (2012 and 2014), as well as the International Conference for Arabidopsis Research (ICAR) in 2013, the Australian Research Assembly on Brassicas (ARAB) in 2014, and the Agriculture Bioscience International Conference in 2015. A chapter of my thesis was published in 2015 in the journal of Plant and Cell Physiology (Ashnest et al. 2015). 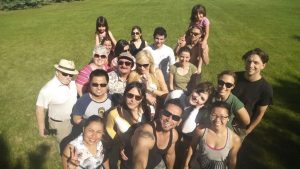 Like many other PhD candidates, I began looking for a post doc fellowship about 6 months before submitting my thesis. I had applied for several advertised positions, but hadn’t been granted even an interview. Then in May of 2015, I met Dr Tim Sharbel at a free seminar at the AgriBio Systems Biology conference. Tim was in the process of moving his entire lab from Germany to Canada, and was recruiting post docs. Tim’s content and manner really impressed me, and when he mentioned that he was hiring, I decided on the spur of the moment that I would approach him about a job. I went to the ladies’ room and did the “power pose” for 2 minutes, then bravely walked up to Tim and introduced myself (he’s since told me that he had no idea how nervous I was…). We had a brief chat, and arranged to meet more comprehensively the next day. I remember going home and asking my husband, “how do you feel about Canada? Because I met this guy today…”

Tim and I chatted for about an hour the following morning. No pressure, I thought, but this is an interview! In the end it went really well; I had the skill set that Tim was looking for and we got along great. About a fortnight later, after Tim had read my CV and some positive emails from my referees, he offered me a job! There was a little more back and forth over contracts, and it took some time for us to arrange permits to work and live in Canada, and to pack up our home and all our things, but about 6 months later my husband, my cat and I were boarding a plane to Saskatoon. Now I’m living on the other side of the world, working with a wonderful team of people, and doing some really exciting science. I owe it all to the power pose and a moment of great bravery!