Plants have evolved quite a number of ways to evade predators. An obvious strategy for an organism incapable of rapid movement out of danger is to produce toxins. Whilst the most notable plant defence molecules are small molecule secondary metabolites, there exists great many peptides that are also expressed in plants. One such class of these peptides are known as cyclotides, and these have special properties worth talking about. The discovery of cyclotides goes back to 1973 when Norwegian doctor Lorents Gran discovered that the active ingredient of the herbal tea African women drink in order to induce birth is apparently an ultrastable peptide that can survive boiling and oral ingestion1. Gran named the molecule kalata B1—after the local name of the plant kalata-kalata (Oldenlandia affinis). Since then many other cyclotide-related studies spawned. However, it was only in 1999 that the term “cyclotide” was coined; and these specifically pertain to head-to-tail cyclised plant peptides which have three disulfide bridges that are arranged to form a knotted topology2. Cyclotides are found to exhibit a range of biological activities including anthelminthic, cytotoxic, molluscicidal and antimicrobial activities3. Other than these, cyclotides have very promising applications both in agriculture and in peptide-based therapeutics—the former being the hypothesised evolutionary role as an insecticide and the latter which can be attributed to their ultrastable properties (brought about by its cyclic structure and knotted topology), thus be used as frameworks for peptide drug engineering.

Before the year concluded in 2016, the first cyclotide-based bioinsecticide called Sero-X was made commercially available. The product was developed and is being manufactured by the Australian-owned company InnovateAg. The insecticide is currently being applied to control pests on cotton and macadamia crops. Although there are yet no cyclotide-based peptide therapeutics on the market, the possibility of this scaffold appearing in a commercial product may not be that far off as several proofs of the concept have already been published3. The main idea behind this is to “graft” or replace a number of native cyclotide amino acids with specific sequences which can target cancer cells, adipocytes, cell receptors, and possibly many other targets. By having these sequences grafted into the cyclotide scaffold, we are able to create ultrastable peptide therapeutics that are highly specific and would not interfere with healthy cells. There is repeated emphasis on “ultrastability”, as this property is essential to improved peptide drug delivery and half-life. A particular peptide-based drug may be stable in vitro but when administered in vivo, an entire array of enzymes, compounds, acids and proteases plus the non-optimal environment can encumber peptide function, or lead to degradation. Another good point, or perhaps one of the best points of cyclotides, is that they are naturally produced in plants. This implies that we can utilise plants as biofactories for the production of these cyclotide-based therapeutics. The advantage of this plant-based system is that we are able to cheaply produce medicines in large quantities, making them affordable to all walks of life, especially to people in developing countries who will finally be given VIP access to life’s basic necessities. 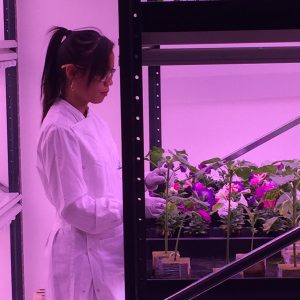 My winning poster entry at ComBio 2016 entitled “The key drivers of cyclotide production in butterfly pea” is but a glimpse of a very big picture. I am part of a big group headed by Prof. David Craik, the driver of research in the areas of cyclotide therapeutic and plant biosynthesis of cyclotides. I would love to think of our group as a factory where we are categorised into several subgroups that are unified with a goal. For instance, the chemists and structural biologists synthesise and characterise the peptides. The cell biologists and biochemists subsequently test these peptides in vitro and in vivo. The molecular biologists and plant scientists then express the peptides of interest into the plants for possible mass production. I happened to be sitting at the end of the chain where my colleagues and I try to establish an optimised system for the production of pharmaceuticals in plants. The poster features one of the many aspects of production in plants we are looking at. In a nutshell, I want to know what drives cyclotide production in butterfly pea (Clitoria ternatea), as this specific plant expresses chemically diverse cyclotides in all life stages and in such great abundance. Once I have characterised the key drivers, I can potentially use these to drive the production of cyclotide-based pharmaceuticals in other plant systems that are economically important. In other words, we need to identify the best driver to race the fastest car in a professional team, and hopefully cross that finish line first to bag the golden trophy.

1   Gran L. On the effect of a polypeptide isolated from “Kalata-Kalata” (Oldenlandia affinis DC) on the oestrogen dominated uterus. Acta Pharmacol Toxicol. 1973;33:400–8.