Born and raised among the tropical plants on a small farm in Southern India, I never dreamed of becoming a researcher instead of a farmer. With a Master’s in Plant Pathology and a short exposure to the management of diseases in horticultural crops, in 2007, I had the opportunity to migrate to Australia to undertake a PhD at Plant Breeding Institute (PBI), University of Sydney. Until the time, I didn’t realise that PBI is the pioneering centre for fundamental studies on plant-pathogen interactions. With the outbreak of the deadly stem rust fungus Ug99 in East Africa, my PhD project was specifically focused on the molecular genetics of wheat stem rust resistance. At PBI, I was working with Drs Harbans Bariana and Urmil Bansal who are world renowned expertise in identifying and charateristing novel rust resistance genes in wheat. With a year of training on rust pathogenicity, in 2008, I moved to Dr Evans Lagudah’s lab at CSIRO, Canberra to continue the project towards rust resistance gene cloning. I was so excited to join Evan’s lab as it is one among the very few labs of the world which are successful in cloning rust disease resistance genes from the complex wheat genome. Given the complex nature of the wheat genome, it was a challenging project for PhD training. But with emergence of Ug99 as a major threat to global food security, I was highly motivated to succeed and I cloned the first stem rust resistance gene Sr33 from wheat. Further enthusiasm came when the results were published in Science (with cover page highlights) capturing the attention of several media outlets including BBC news (http://www.bbc.com/news/science-environment-23084782). 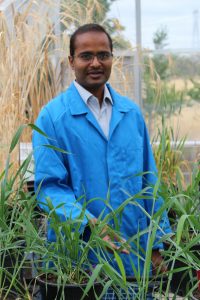 ring that time, I realised that the wheat and the plant science community as a whole was in need of a robust method for isolating disease resistance genes as the conventional map-based gene cloning was tedious and time consuming. Using the resources of Sr33 and in collaboration with Drs Brande Wulff (at John Innes Centre) and Jonathan Jones’ lab  (The Sainsbury Laboratory) at Norwich (UK), a rapid resistance gene cloning tool called “Mutagenesis and Resistance gene enrichment and Sequencing (MutRenSeq)” was developed to identify resistance genes within two years, whilst the map-based approach on average requires five years. This new technology was further validated by the successful isolation of two additional stem rust resistance genes, Sr22 and Sr45, which like Sr33, were effective against Ug99 and other wheat stem rust races. Along with the publication of this method in Nature Biotechnology (as a cover page article), the technique holds a patent in the USA. Apart from wheat, this robust gene cloning technique is currently being extended to other agricultural crops such as barley, soybean, potato, tomato and rye.

With the above achievements, I was fortunate to win the prestigious ASPS “Peter Goldacre Award”. This award contributed to my success in winning a highly competitive Australian Research Council “Discovery Early Career Researcher Award”. My gratitude for both awards has fuelled my hunger for future research success, where I am now identifying the signalling elements and molecular pathways of the cloned rust resistance genes in pathogen infected wheat. As plant pathogens evolve rapidly and become a major problem for securing food production and sustainable agriculture, knowledge of disease resistance gene function is required to help innovate a new generation of robust crops with durable resistance to multiple pathogen varieties.

I would like to acknowledge Sydney University, ACIAR, Durable Rust Resistance in Wheat project and Grains Research and Development Corporation for the scholarship and the research grant to undertake the aforementioend studies. Finally, I  thank Drs TJ Higgins, Jeff Ellis and Evans Lagudah at CSIRO for nominating me for the prestigous ASPS Goldacre Award.