Here are Chenchen and Mainul writing about ComBio2017. Hope you manage to get your applications in C.O.B. today for ComBio2018. 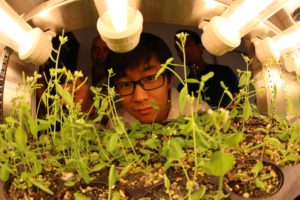 An understanding of the mechanisms which have evolved to allow plants to tolerate drought are crucial to the development of crops which can be productive in adverse climatic conditions.
My PhD project focuses on a retrograde signalling pathway, (3’ –phosphoadenosine 5’-phosphate, PAP), which regulates plant stomatal activity and therefore helps plants to tolerate drought. I am looking at this signalling pathway with an evolutionary perspective and trying to understand the mechanism that has evolved as plants conquered the land during evolution, this process can be also regarded as the first development of adaptations to drought.
If similar mechanisms can be exploited in crop breeding, higher crop yields can be achieved under unfavourable environmental conditions such as drought.
I have used a wide range of techniques in my research including bioinformatics, electro-physiology and genetics. Some of these results were presented on my poster at ComBio-2017. I am grateful that this poster was chosen as the winning student poster by ASPS, and this has also allowed more people to become familiar with my research.
ComBio-2017 was an awesome occasion for researchers. It opened my eyes to new and exciting research and also gave me a chance to meet other researchers in my field. During the poster presentation, ideas and knowledge were exchanged and this has helped me to explore further aspects in my project. I am a proud member of ASPS and am looking forward to participating in future conferences. 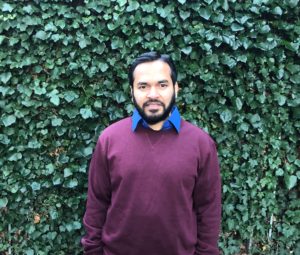 Plants are the most trustworthy friends for mankind. They are equipped with an internal system that can exploit sunlight, water and carbon dioxide being exhaled by humans in order to generate carbohydrate and oxygen which in turn is inhaled by humans. Thus, plants act as primary food producers and play a key role for survival of all other living organisms in the ecosystem. As our global population is rising consistently and expected to reach 9.7 billion from the current 7.3 billion, plant scientists, especially those working with crops face a significant challenge in order to meet this high demand of food and fodder. As different traits such as yield output in plants are regulated by genes, therefore plant scientists are constantly innovating molecular genetics based strategies to tackle this situation. Due to this aspect, I have chosen to pursue a career in plant science.
The Australian Society of Plant Scientists (ASPS) is a community which is contributing towards the aforementioned crisis at the national and international level. Scientists of this organization include some of the leading members in their respective fields whose entire life is dedicated towards unveiling solutions for feeding the hungry mouths around the world. The travel grant offered to me by ASPS for attending Combio 2017 conference at the Adelaide Convention Centre, Adelaide was a significant boost for a young early career scientist like myself because I could present a poster about my PhD research work on flowering time regulation in garden pea which is relevant for yield outcome, and thus received constructive feedbacks from some of the experts in the field. Likewise, I learned the skill of presenting the work of my entire thesis within two minutes by participating in a poster teaser session. Besides, I gained much needed knowledge about the research work being conducted by some of my peers as well as senior members of the society to address various burning issues such as improving different yield parameters, biotic and abiotic stress tolerance, symbiotic relationship development with friendly microbes and so on. Moreover, I was able to network with other PhD students and other scientists specifically by attending the conference dinner where the president of the society, Professor Sergey Shabala gave us an overview about the current status of ASPS in comparison to some major countries and some of the key responsibilities that ASPS members need to carry out to take the organization to an even higher level.
Overall, attending this conference assisted me to become a better professional which would in turn help me to develop myself as a future leader in this field, and thereby disseminate my knowledge among the next generation of plant scientists who can then take up the baton to deal with global food security.